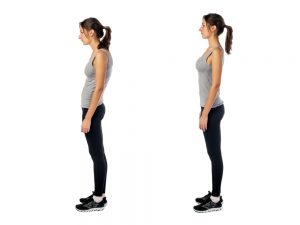 Posture is the position of someone’s body when doing an activity. This activity can be any activity including sitting, standing, or even sleeping. Ergonomics is also a big part of posture and is more the activity you are performing in a work environment.

The spine should have curvatures that correlate with certain areas along with proper alignment of extremities. We look at someone’s posture from two different angles: the side standing and straight on when standing. The side view should show that someone’s ear lines up with the lateral shoulder, lateral hip, and lateral ankle. The view from straight ahead should show that someone is similar and level when comparing the left side of your body to your right side; as in when imagining the person is split in half with an imaginary line.

When poor posture is present, it alters your bio-mechanics and alignment, which causes stress to you and your body. It can cause muscle imbalances where certain muscles become stronger than their antagonist muscle are weaker. A good example of this is when someone with stronger chest muscles and weaker back muscles.

So is posture important? You betcha. A good example would be those people who work at the computer most of the day. The head tends to move forward over the neck causes what is called forward head posture. When this occurs, the weight of your head can increase up to 40 pounds, depending on how far your head is forward in relation to your neck position. So good posture is important for body mechanics but someone with good posture is also seen as more presentable and confident in business. Furthermore, it is less stress on you allowing your body to move and function better, resulting in less tightness and sometime pain symptoms.

Treatment options could include:

So how is your posture? Give us a call today to see how our chiropractors can help you correct your posture and live a less stressful life.

Does Technology Cause Back Pain?

Manual labor jobs are on the decline thanks to advancements in technology. Jobs are becoming less physically demanding as the workforce moves from the factory lines to the desk. Technology has certainly made our lives more sedentary.

But as technology makes our lives easier, it comes with problems. Many things in life work as a bell curve. There are limits to everything, as both ends of the bell curve have extremes that should be avoided—too much of a good thing becomes counterproductive.

This idea applies to technology in the workforce. Manual labor’s peak caused immense physical ailments to line factory workers—there was too much labor and not enough rest. As the workforce migrates from manual labor to desk jobs that are almost exclusively sedentary, researchers are finding that too much not-moving is increasing low back pain throughout the first-world.

The prevalence of low back pain is on the rise and is unlikely to plateau anytime soon. Researchers believe much of this is due to the increasing number of inactive, or sedentary, workers. In the past, manual labor jobs forced people to be active. Today, people are sedentary at work and have the choice to be sedentary at home.

The body adjusts to its lifestyle and a sedentary body will adapt accordingly. For instance, it’s common knowledge that muscles weaken with an inactive lifestyle. When people think of weak muscles, they think of small arms and a weak bench press. But this is not the case. Gym-goers and active people aren’t just training to “look hot.” Sure, they don’t have a day dedicated to lower back, but each activity they do strengthens their lower back. Just like the bell curve mentioned earlier, however, too much activity can also lead to back pain and potential injury.

How sedentariness causes back pain

When a sedentary person’s lower back muscles weaken, more force is applied to the spine ancauses back problems. Low back pain can ruin an entire day. This is because your lower back is used in almost everything. Do you remember in gym class when the teacher would torture the class with a core workout? Do you remember how your abdominals hurt when doing anything the next day? The same applies to your lower back. What many people do not realize is that your low back is actually a part of your core, not just your abdominals.

The core portion of your body plays a vital role in twisting, lifting and stability, functions that are utilized in all forms of exercise. When your body is active, no matter the activity, your core is engaged and firing. But don’t worry, it won’t hurt like gym class the next day. Core muscles are stability muscles and take much more effort to cause soreness.

How to fix, or manage, lower back pain before it’s too late

Chronic back pain can eventually become severe enough to cause permanent problems. But fortunately, many cases of chronic low back pain have multiple avenues to actively treat, halt and even reverse their effects. Exercises such as weightlifting, jogging, walking, active hobbies or simply remaining active with your children are some the more common ways, as long as this activity is frequent throughout each week. In addition, chiropractic manipulations will realign your spinal column, alleviate pain and prepare you for your new active lifestyle.

It’s important to note that the core of your body is used in almost every motion. Back pain will happen to everyone due to the sheer exposure to injury opportunities. But these flare-ups will become episodes, not daily ailments, as you become active and strengthen those muscles.

Posted in Blog, Uncategorized | Tagged back health, back pain, neck pain, spine misalignment, technology | Comments Off on Does Technology Cause Back Pain?

My pain has been with me since 1996 and my feet and legs were totally painful.  Walking is like walking on glass or nails and then the burning pain in my toes would start.Following acupuncture ...
Life was very painful.  I never felt good and medications really have not helped.Following Treatment: I am much improved but I still recognize my limitations and I need to make more lifestyle changes to make ...
Life was good but my condition was bad.  I lead a very active lifestyle with weightlifting, judo, etc and along with my job, the pressure on my back was incredible.  My movement was restricted and ...
I experienced chronic pain in my right foot from heel spurs.  Orthotics were not enough to correct the problem.  After 6 months of not sleeping well and associated problems of fatigue, I sought help at ...
I stopped doing things I enjoyed, like working out.  I felt limited in my activities and sleeping was becoming an issue with my neck pain.Following treatment: Its so much better. I can workout, take long ...
I am very active but hampered by lower back pain.  It prohibited me from participating in firefighter training.Following Treatment:  I am back to doing everything I love without the restriction of pain. Fletcher Chiropractic taught ...
I was in a mental fog.  I couldn't think or concentrate and was not doing well.Following acupuncture treatment: I am much better. My mind is clear and my work performance has improved. Julie A.
Working with Dr. Kadi has changed my life. Before going to her, I was stiff and had pain in my neck, back, hips, legs and feet.Following Treatment: Working problem areas and doing exercises she has ...
Being from a small town, I love mom and pop shops.  I like the personal level and hands-on approach that Fletcher Chiropractic takes when it comes to chiropractic care. Fletcher Chiropractic was very personable and ...
Life was manageable.  As a runner, I was able to run without issue, but not without tightness and occasional pain.  Throughout the day, perhaps 2-3 days a week, my knee, calf, and shin experienced significant ...
prev next
read more
Site by Transformation Marketing